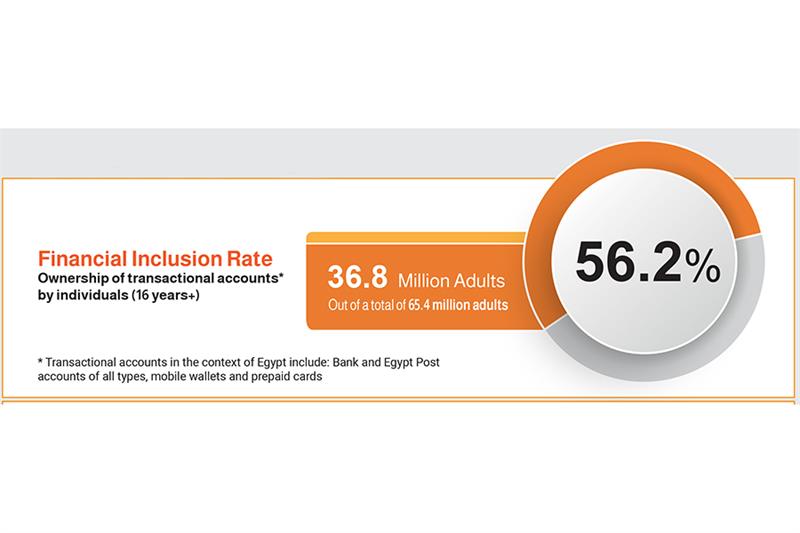 The Central Bank of Egypt (CBE) last week released what it dubbed the “Core Set of Financial Inclusion Indicators” to gauge financial services and products’ outreach across the whole society.

This comes within the framework of the efforts exerted towards achieving economic empowerment. Egypt has been pushing for financial inclusion in recent years, which culminated with CBE Governor Tarek Amer announcing a nationwide financial inclusion strategy in 2020.

Roughly two-thirds of Egyptians are unbanked, according to data by the World Bank, which is spurring banks and financial institutions to move quickly to increase digital channels and policymakers to aim for a cashless society.

“The publication of the CBE’s Core Set of Financial Inclusion Indicators is an excellent step forward that will eventually help in designing Egypt’s much belated National Strategy for financial inclusion,” Abdel- Azim indicated, adding that understanding the nature of financial behaviour across multidimensional metrics gives policymakers a more nuanced appreciation of how Egyptians are financially served, helping them ultimately realise their economic goals.

Over the past six years, Egypt saw a significant growth rate of 115 per cent in financial inclusion, bringing the total ownership of transactional accounts — ranging from all types of accounts at banks, Egypt Post, mobile wallets, and prepaid cards — to 36.8 million citizens. This represents 56.2 per cent out of the total 65.4 million eligible adults (+16 years old), according to the Core Set of Financial Inclusion Indicators.

In terms of women’s financial inclusion, CBE’s indicators showed a growing trend in the number of females who own a transactional account, recording 16 million women by the end of 2021 with a growth rate of 171 per cent compared to 2016. As for prepaid cards, the total number stood at 39,883 cards per 100,000 adults, while the number of mobile wallets reached 38,505 per 100,000 adults.

Fintech expert Abdel-Rahman Hamdi told the Weekly the government aims at providing financial or banking services and products to individuals and companies in all segments of society in a simplified manner. Whether in the form of payment solutions, educating people on savings plans, loans or insurance, Hamdi said, they are provided to them in an easy, simplified, and sustainable manner.

In that regard, Hamdi emphasised the importance of seminars and educational sessions that aim to educate people and spread awareness of how banks work in order to be truly inclusive of all.

Under the directives of the CBE, banks conduct educational sessions on financial inclusion across governorates and villages and also universities to spread awareness on the benefits of opening bank accounts. This is to change the entrenched misconception that only wealthy people can open bank accounts.

The main target of such initiatives is to increase the number of banked citizens, in which people across different ages, segments, and demographics can open bank accounts seamlessly.

When people deposit certificates into their bank accounts, one after another, it contributes to overall economic activity in all segments of the country and pumps more money into banks, Hamdi explains.

Long gone are the days when people thought that banks primarily cater to millionaires. Banks and financial institutes should also be inclusive of all different socioeconomic classes, he adds.

When it comes to the challenges, there is a general consensus that informal workers remain the most pressing challenge in the face of financial inclusion, experts agree. Opening a bank account requires proof of a source of income, and thus, for a seamstress, a craft worker or a freelancer this can be quite a conundrum, they say.

However, new Fintech companies are leveraging digital transformation as we move towards a cashless society to create e-payment solutions that ease the process even more.

Financial inclusion in Egypt, however, is still in its infancy, Haitham Al-Said, director of government relations and financial inclusion at the National Bank of Egypt (NBE), tells the Weekly. Such initiatives and efforts are required to create a promising inclusive future, however, there is still fear among many people, especially in light of the current circumstances, over keeping any financial liquidity at quick disposal. “This new baby still needs a lot of care and support decisions especially from the banking sector,” Al-Said said.

*A version of this article appears in print in the 12 May, 2022 edition of Al-Ahram Weekly.