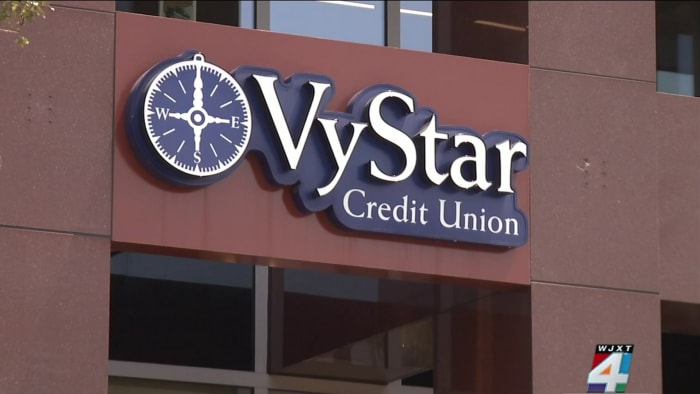 JACKSONVILLE, Fla. – As VyStar Credit Union’s online and mobile banking issues continue to frustrate members more than a week after the problems began, the Florida Office of Financial Regulation said it is monitoring the situation.

On Monday, this message could be seen on the credit union’s website:

“Online & Mobile Banking is currently unavailable. Our teams are working as quickly as we can to resolve issues.”

The message hasn’t been updated since a planned outage began, and many VyStar members who have contacted News4JAX say that they want the credit union to be more transparent about what’s going on and what members can expect. VyStar members have struggled to get information on their accounts online for more than a week after the outage was unexpectedly extended.

TELL US: VyStar members, are you sticking with the credit union or leaving?

News4JAX asked Insiders and viewers whether they were sticking with the credit union amid the woes, and hundreds of people responded. Some said yes, some said no, and others said they were considering it.

“After 32 years, I opened an account with another CU. I will be leaving VyStar once all transactions clear. This was handled so poorly that I have lost trust in VyStar,” wrote one person.

Another person wrote: “I will not leave Vystar because the online computer system problem. The problem will be resolved in a week or so. Vystar is a great Credit union that I can trust to treat me fairly.”

And someone else wrote, “I have been thinking about leaving VyStar. I have been with them for over 20 years and would hate to leave them but this is ridiculous and out of control.”

For some VyStar members, like Thomas Anderson, the outage has had very little effect.

“I just prefer to come into the branch bank or use the ATM machine or call that a number and talk to them on the phone,” Anderson said. “My account is fine. My balances are fine. I don’t have any problems using my phone.”

Likewise, member Martha Simpson doesn’t use the credit union’s online functions either, but her sister does. Still, there are no plans to change institutions.

“I’m going to stay with VyStar,” Simpson said. “They’ll straighten it out.”

Member Billy Furr said there’s still a lot of goodwill for the company, but there’s also a limit to it.

One of the many members who have shared their concerns with News4JAX suggested customers start lodging complaints with the Office of Financial Regulation and the National Credit Union Administration.

Under state law, credit unions legally do not have to provide online banking services. The rules for credit unions in the state of Florida say that they “may” offer these services, but that doesn’t mean they have to. On the other hand, if customers were contractually promised these services in their agreements when they joined the bank, they might have a civil case to make, but that would likely depend on the agreement.

As far as oversight, News4JAX reached out to the National Credit Union Administration, and a spokesperson said they’re monitoring the situation.

VyStar, however, is a state-chartered credit union, meaning it’s overseen by the Florida Office of Financial Regulation. Spokesperson Katie Norris said via email on Monday, “The OFR is monitoring the situation as the credit union continues to work through the matter and work with its members.”

RELATED: Complaints, concerns still rolling in as VyStar online banking woes continue | In interview, VyStar exec reveals CEO has been on vacation amid online banking issues but ‘been incredibly involved’

No end in sight to issues

As VyStar Credit Union’s online and mobile issues remain, it also remains unclear when the problems will be fixed.

On Monday, News4JAX submitted more questions to VyStar, asking for an update on the timeline, and received these answers. One question asked if there was any update on the timeline for resolution, and a VyStar spokesperson said, “Our teams are working day in and day out to bring access back to our members as quickly as possible. We are making great progress.”

A statement last week from the company’s leadership said, “We continue to work around the clock to resolve all remaining issues as quickly as possible and are committed to working in the future to regain your trust.”

A VyStar executive told News4JAX on Friday that there is no timeframe for when the issue will be fixed, but they’re working around the clock to resolve the issues.

According to the credit union, which reports it serves more than 800,000 members, everyone’s money and transactions are secure, but members are complaining of inconvenience and sometimes inconsistent information.

VyStar on Sunday opened select branches as online and mobile banking remained offline. The credit union said it is refunding fees that may have happened as a result of the mobile banking issues starting on May 14 through May 21.

“We will continue to monitor and may extend the fee waiver period, if needed,” CEO Brian Wolfburg and VyStar’s Senior Leadership Team said in an email Sunday. “Please know your accounts, balances and transactions have remained safe and secure throughout the conversion, and they should now accurately reflect what is on our core systems. In addition, direct deposits and other transactions were successfully processed in members’ accounts. We are working diligently to get online access up as soon as possible. We recognize this is not the experience you have come to expect from us. We are committed to making things right and ensuring future experiences are what we and our members have come to expect from VyStar.”